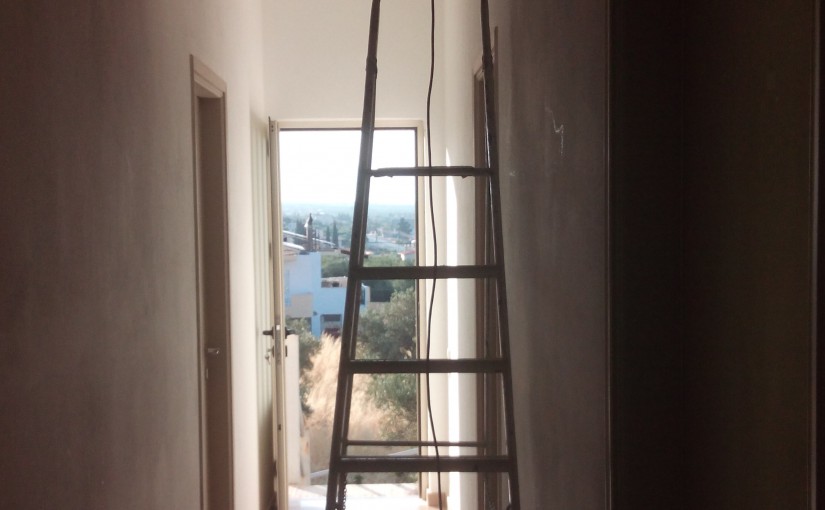 Actually, the water problems seem pretty serious at the moment, not because there is no water (lest our readers think the Greek crisis has already reached into the realm of basic public infrastructure and natural resources) but quite simply one of the pump engines is broken, together with several pipes. This is a “good” chance to explain a bit more about the SAIA/ΙΑΣΑ house in Agioi Deka. First of all, until 1998 or 1999 Italian archaeologists were hosted in another building, the old episkopeio in the center of the village, and at some point in a school. The former director of SAIA Antonino Di Vita made a big invesment when he decided to build an entirely new headquarter, a few hundred meters above the village, with large room for both people and … archaeological finds. The SAIA house is made of two buildings, one of which is mainly devoted to storage of finds and a conservation laboratory. The two buildings are separate, so when water supply is broken on one side, we can queue outside bathrooms on the other side. How convenient. In fact, the accomodation in Agioi Deka is incredibly good compared to most other excavations I’ve been (tents, school classrooms, you name it), but it’s disappointing to see a new building that is already rotting away due to lack of maintenance and, perhaps, a mismatch between a grandiose project and a rather clumsy execution. There are many reasons for this, among them we could certainly count the continuous cuts to the SAIA – I can’t even recall how many petitions to “save” it I signed – and the future looks rather grim from here. After all, how can Italy afford to maintain a handful of such houses around Greece, plus a big headquarter and library in Athens, at a time when new taxes pop out every other month, and old privileges for foreign archaeological schools are erased by inflexible changes in the Greek administration?

From an archaeologist’s perspective, a building that is undergoing continued repair is a double-edged sword: these activities leave traces will be barely visible even in the near future (several layers of plaster and white paint on ceilings damaged by spilling water, plastic and metal pipes of different size and age and quality, …), but are we looking at vital inhabitants who took care of their roof, or scrappy squatters who did the minimum required to avoid moving somewhere else? Are the problems in furniture and services of the house in Agioi Deka caused by the big crisis of 2033 that we all know from written sources? 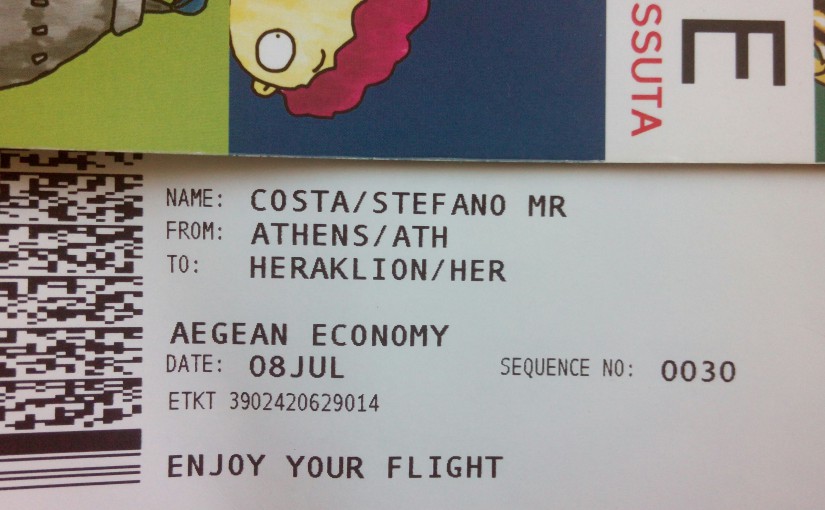 This year, thanks to the combined availability of my employer (the Soprintendenza Archeologia della Liguria), the Italian School of Archaeology at Athens and the University of Siena I was able to take part again in the short field season at the Byzantine Quarter in Gortys (GQB). I promised my colleagues a daily report. Fasten your seatbelts.

Day 0 is, as usual, the day of traveling and spending more than your regular share of time at an airport gate waiting for the next flight. First we hit MXP, that looks more and more like a ghost town with its empty retail shops, alternated with impossibly expensive clothing on sale. I’ll leave further speculation on the grim image of the EXPO 2015 airport for another moment. This year, as ever, coming to Greece means confronting the big Greek crisis, the collective fears of Europe-the-former-EEC. We brought slightly more cash than in the past years, but that is not really necessary, as our monetary footprint became smaller and smaller with substantial lack of funding from the various Italian institutions already in the past years. It is not ironic to think that other research projects focused on Gortys secured more funding, and GQB is among the few ones that are explicitly looking into the big late antique crisis, the end of the ancient city – as if dealing with global failure was an undesirable endeavor even from a scholar’s perspective. But it could simply be our fault, unable to keep the pace of grant applications.

But there’s more, as we land in ATH just in time for the sunset. The air is fresh, the temperature mild and it’s nothing like Italy. It’s 10 years since I came to Crete for the first time as an undergrad and with the country shaken by years and years of social and economic crisis, I cannot help wondering if what we do makes any sense for this place, for the Greek people. Sure, there are colleagues who share the same research interests. There are plans to put a small part of what we found on display in a museum, like one page in a long book. A decent list of academic publications, with other in preparation. One plot of land where, in some years, the public will have a chance to walk among the excavated remains of 7th century houses and workshops. I know from experience that the sum total of direct and indirect economic impact of all that is small, too small to make a difference – and that it’s too little too late to leave a trace in public culture. The latter is especially problematic in Greece, where classical antiquities and byzantine antiquities are treated separately, and we are working “in between” (not that this is unique to Greece: just think about the absurd hiatus between the preservation of prehistoric landscapes and natural resources in many countries).

The flight to HER is so short you can barely notice the small lights from Melos and Thera in the dark, before landing. In Italy, in France, in Germany, most people are not given a chance to see the difference between the former Greek governments and the current Greek government, the Greek elite class and the Greek working class (including the unemployed), between finance and economy. Apathy or neutrality don’t seem like an acceptable option, not for an archaeologist. Even late at night, planning work for tomorrow and unpacking the small luggage I had, I can’t stop thinking about what happened on Sunday, the ΟΧΙ that still echoes in ripples around the globe.