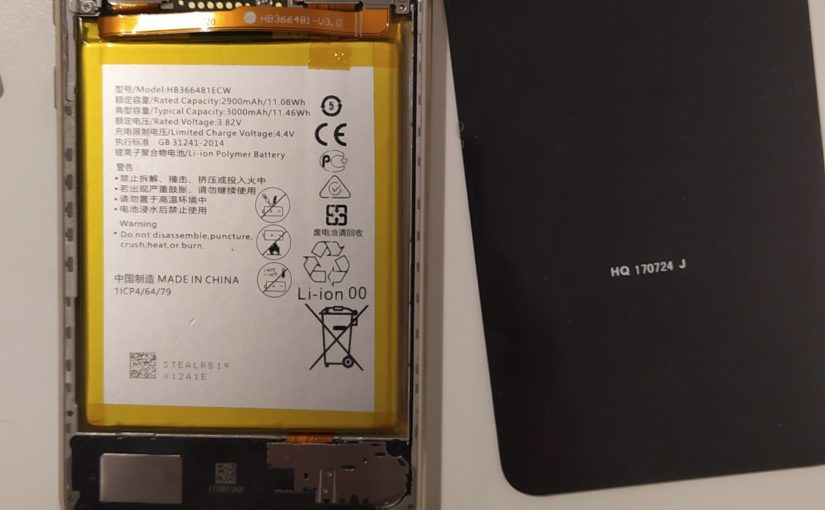 A few months ago the battery of my smartphone, a regular Huawei P10 Lite, started acting abnormally. Not only battery life had become very short, but some activities like trying to take a photograph would make the phone shutdown immediately. The phone is now 3 years old and I was not happy about buying a new one just because the battery is damaged. Still, I was almost ready to buy a Fairphone 3+ when I decided I could try replacing the battery. After all, I have some experience with hardware repair!

The iFixit guide is very detailed and, most importantly, you can buy the replacement battery and all repair tools for 25 euro. It’s worth trying!

As many commenters point out, the most time consuming part is removing the battery after all other parts have been moved, since there’s a lot of glue. It took me more than one hour and despite my best efforts it came out slightly bended. I didn’t break it though, which seems more important. The iOpener is quite effective however, as are the other tools.

Putting back enough adhesive to keep everything together is also a long operation, because you will need to cut small pieces of the right length and width. The tools work well even for this part of the repair.

At the end I was not even sure the phone would turn on, but it did, and what a satisfaction. I only had to throw away the old battery (at the correct collection place) and the “old” phone is almost like new. The battery now lasts for 36 hours or more, and I can hope to keep it running for a few more years.

I could have asked a repair shop, but even though it’s a pure hardware repair, I was not comfortable leaving my personal phone to someone else. And it would have been more expensive, of course.

I wanted to write this short post to let everyone know that repairing your phone is possible, thanks to great communities like iFixit, and you should avoid throwing away a literal goldmine just because it’s slightly damaged.