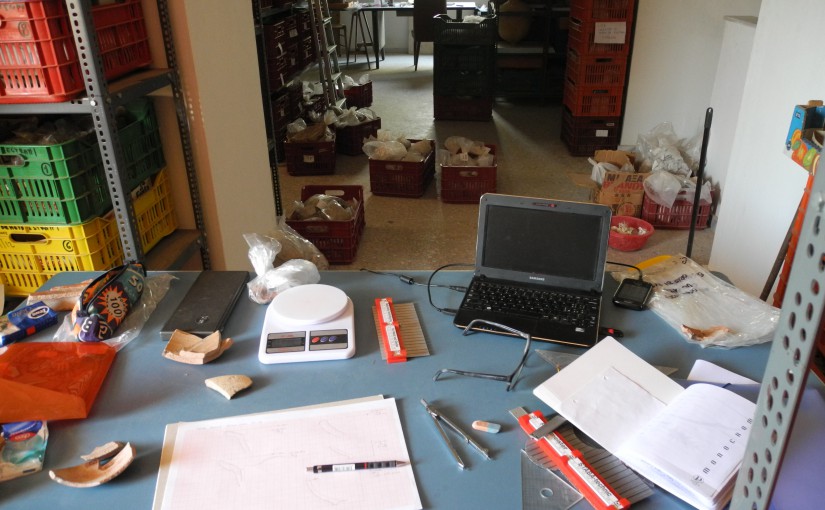 14th July was again crucial for the Greek crisis, notwithstanding any historical recurrence of revolutionary events where the powerful elite was overthrown without mercy.

Here in Gortys, the good news is that the pump engine was repaired, boosting our morale, but the day was a mixed bag and my attention was split among tasks like the write-up of Attività 99 (the latest occupation phase in GQB), a further look at the GONA finds that need drawings and photographs, and some GIS maintenance for Elisa. Since I started counting from 0, day 6 means that I succeeded in blogging every day for one week: as any blogger knows, this takes a lot of effort, discipline and sometimes you have to accept that there is nothing truly exciting to write about and that’s OK. At the same time, this is different from a “log of activities”, despite the etymology.

In the afternoon we had a frank debate about the sustainability of archaeology abroad, particularly of Italian archaeology, in the light of the archaic funding schemes that are available to Italian research institutions. The conundrum is with the role of archaeological research not merely as a pure academic activity, but as a first step that most local institutions rightfully believe should lead to a contextualised preservation of ancient remains. On the other hand, there is zero incentive on the academic side to pursue this kind of “extended” path: when your monograph or journal article gets published, it makes no difference whether the archaeological remains you based research on are rotting among the vegetation or are part of accessible heritage paths for the public. Does your university understand this problem? Does a coordinated effort at the country-level help? In Greece, all activity from foreign research bodies is supposed to go through the filter of archaeological schools, like the BSA, the EFA, the SAIA, the ASCSA, etc. These are venerable institutions more than 100 years old, they play the same role but have many differences in the size of their staff, the source of their funding, the amount of involvement in each project they coordinate. Crucially, and luckily I think, in the past 10 years the Greek ephorates made extremely clear demands for preservation efforts before further excavation could be undertaken – with the assumption that excavation must be the first step towards conservation and there cannot be conservation without excavation. In theory, this puts survey-based research project at an advantage, since the main cost associated with the post-research phase is storage of finds (which has its own problems but is less expensive than in situ conservation of building remains). In the end, we could only agree that the archaeological schools have a hard time keeping the pace of changes in both the funding of research and the needs of local society (as expressed through both political movements and civil society). The relationship with higher education seems even more problematic: after all I am here, a civil servant from the Ministry of Cultural Heritage and Tourism, doing archaeology-related fieldwork thanks to a “historical” link between the Italian Soprintendenze at home and the Italian School at Athens, but this link pre-dates by many decades the creation of doctorates in Italy (in the early 1980s) and now largely obsolete.

Late in the afternoon, I wanted to reenact one of the photographs that illustrate my piece in Archeostorie, the “unconventional manual of real life archaeology” that I dedicated to Archaeology without borders taking inspiration from my personal heroes like Bill Caraher and Colleen Morgan.