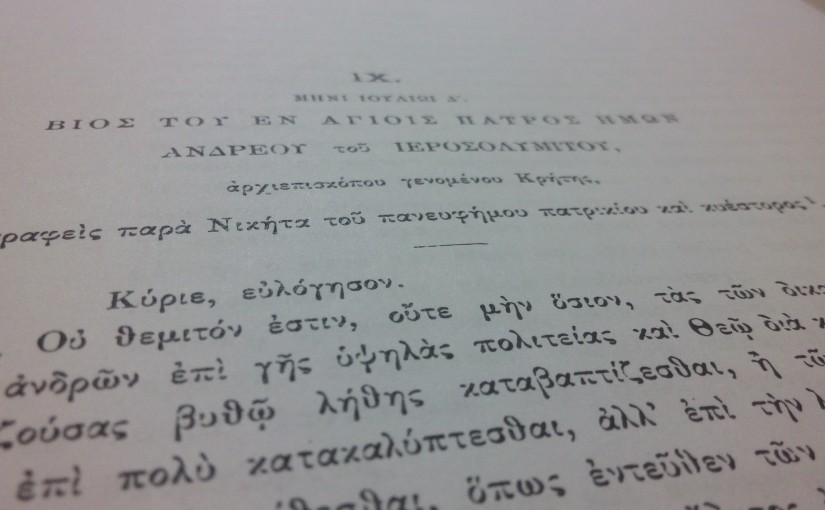 Andrew of Crete was a (famous) archbishop of Crete during the early 8th century. He is a venerated as a saint by both the Orthodox and the Catholic church, and even today he is particularly appreciated as a hymnographer.

Andrew was born in Damascus, spent his early years in Jerusalem (and that’s why he’s also known as Andrew of Jerusalem) and he only spent a fraction of his life in Crete, but from his biography we learn that he was particularly active in the “typical” activities of an archbishop, such as building new churches, taking care of the existing ones, etc. Given the scarcity of written sources about Crete in the 8th century, the life of Andrew of Crete is an important historical document for the study of this period. However, it should be noted that no more than half of the text is about the years Andrew served as ἀρχιεπίσκοπος τῆς Κρητῶν φιλοχρίστου νήσου, archbishop of the Christian island of Crete.

I heard several mentions of this biography in Rethymno last month so I was rather curious. To my discontent, I could only find the same boilerplate summary of the life everywhere on the many thematic websites dedicated to Christian saints, and even Wikipedia doesn’t stand out as particularly accurate. What is really disappointing is that nowhere was a reference to the actual biography! Still, that was published in Saint Petersburg in 1898, in volume 5 of the Ανάλεκτα Ιεροσολυμιτικής σταχυολογίας, with the descriptive title of Βίος του εν αγίοις πατρὸς ημων Ανδρέου του Ιεροσολυμίτου, ὰρχιεπισκὸπου γενομένου Κρήτης. This reference is found in some scholarly publications, such as G. Kourtzian’s «L’incident de Knossos (fin Septembre/début Octobre 610)», Travaux et mémoires, vol. 17, 2013, p. 182 (even though the reference has the wrong publication year). The links above point to the Internet Archive: the life of Andrew of Crete is actually available on the Web but it is difficult to find. Unfortunately the Google scan on the Internet Archive is missing two pages (170-171).

There are two manuscripts for the biography of Andrew, one from the monastery of Vatopedi, the other from Agios Dionisios, both on Mount Athos.

I have started a transcription at Wikisource. I had never typed polytonic Greek before, but it’s very easy to get a decent typing speed on GNU/Linux following the document Writing Greek, Greek Polytonic (Ancient Greek) on Linux by Simos Xenitellis.