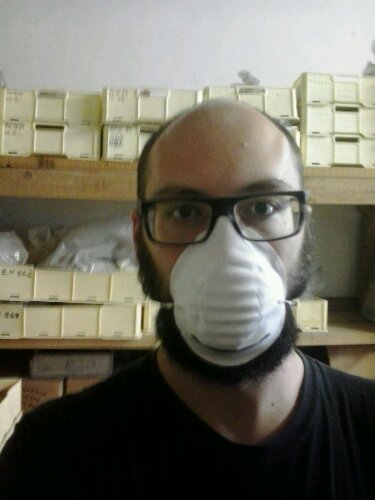 Yesterday I posted a picture of a crate with sherds of Roman pottery and a spark plug. That was fun to find and look at, because of course a spark plug is an out-of-place artifact among archaeological finds. Or rather, it is not at all.

As Lewis Binford would argue, both Roman pottery and the lonely spark plug live in the present, regardless of when they were made. Archaeologists like to think of storage buildings as “sacred” spaces of cleanliness, order and rest for the countless finds we unearth every day. That’s what manuals prescribe, so it must be like that. However, as anyone who has seen some of these rooms filled with crates and boxes knows, disorder and dirt is the rule, not the exception. There is rarely, if ever, a clear-cut separation between storage of finds and working tools, or in the best cases between storage and display. Corridors are always blocked by other crates that couldn’t find a place on the shelves. Finding where one specific crate is may take one minute, but it is always pulling it out that will keep you busy for ten or fifteen minutes. All this provided that proper archive records exist and that you can get a list of where things are, and that may prove difficult or even impossible, regardless of who is in charge of producing such a list (heck, you may be responsible in most cases). That spark plug is not there to annoy or bemuse, it is just a gentle reminder that labels and clean sherds do not stop things from happening, objects from moving (shelves collapsing, crates of any material rotting away and breaking) and people interacting with them all the time. There you have it, a storage room filled with archaeological finds is a living context, and one that should not look unfamiliar to an archaeologist.

Sub-optimal working conditions, uncontrolled temperature (both cold and hot), dust everywhere, need to move heavy loads: this list may be just a random sample of the small everyday glitches of archaeological fieldwork … including that of the finds specialist, and of the assistant to the finds specialist, and of the person working to keep that sacred space clean and accessible (whatever their job is called).

There is an hopefully increasing consciousness of the beauty and significance of “digging the dirt” (best exemplified by works as Between dirt and discussion by Gavin Lucas) in archaeological fieldwork. Dirt is qualifying archaeology, and attempts to leave it out of archaeological discourse are demeaning. No matter how much you clean them, potsherds are still pieces of fired clay found in the soil. Let us bring more of that consciousness out of the trenches, because in the end the substantially boring nature of our work is the same.

Crazily enough, I am discussing most of the above in my dissertation.

Un commento su “Spark plugs and archaeological finds: where do the ethics of fieldwork stop?”